Eddie, the Panamanian KTM adventurer, told me a few weeks ago about an orchid nursery on the outskirts of Cerro Punta, the highest village in Panama, at 6500 feet.

It’s called Finca Dracula, after a species of orchid. But that may be a cover story for something more sinister, we hope. Lucinda says to me ‘why don’t we go through Romania next year and do some blogs on Vampire hunting?’

Finca Dracula is one of the top ten orchid collections in the world and the largest in Central America.

I’m partial to species collections, so off we went first thing this morning, further up into the mountains.

Here’s a field trip sort-of post, for fun. Up we go

Over a river, the water gin-clear, making that vital mountain sound we’re so familiar with back home

Expertly laid out plots on the hillsides 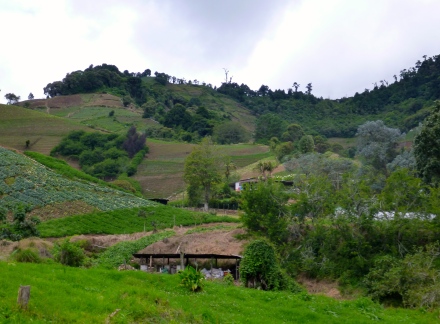 To the village of Cerro Punta 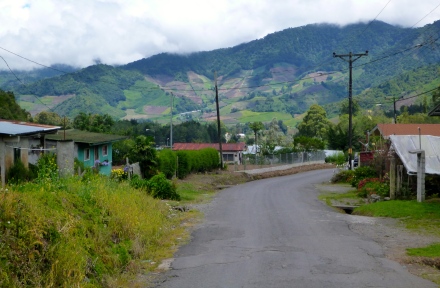 It was pointing up this road, loose rock as it got steep for a few hundred yards into the trees. Stand on the pegs and give it huge gas! The local kids like this behaviour, so do some of the moms, but the dads don’t, so no stopping or falling allowed

Park in the courtyard. No-one around, as usual. Except Dracula, probably right behind that tree to the left I thought. ‘Except it’s daylight’  Lucinda said

About 75 feet through a garden to the nursery

Set against the hillside 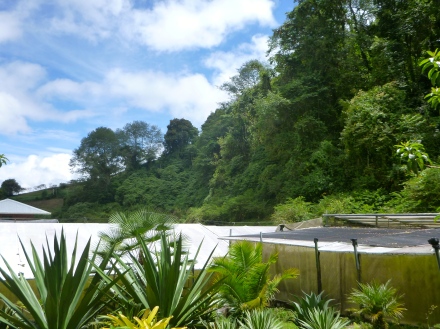 Into this covered area

There’s absolutely no-one here. ‘That’s because it’s daylight, as I said before’ Lucinda says. We wander around, maybe 15 minutes later we bump into a young girl (very pale) and we ask ‘cerrado?‘. She smiles and says no. So off we go behind this door 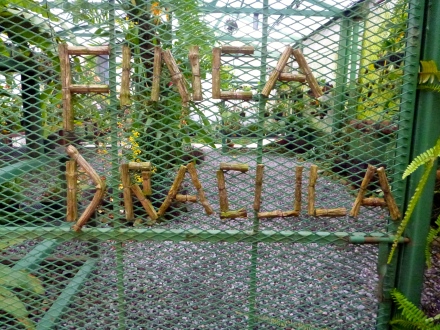 To a general orchid display. My orchid knowledge isn’t that hot. I’ve only kept them on-and-off over the years as it’s not fair on them without the proper environment

But right away we come across a table of Masdavallia, which I have kept, because their beauty is more subtle than the stereotypical hospital-visit Odontoglossom types

Many species, some very small 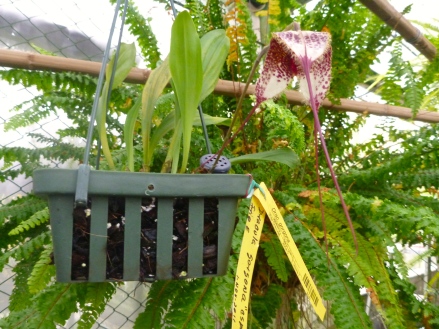 And, I guess for the tourists, this unimpressive type

This little fellow was cheerful 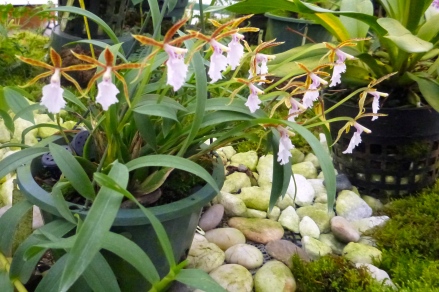 Running the length of a wall they’d hung small pots

I’m generally familiar in a casual way with much of what I’d seen, but then I saw something which took my breathe away. A display of incredibly tiny orchids. The flowers on this specimen are only about 3mm tall across and the whole plant structure was fascinating

Even smaller, this whole plant is a couple of inches across

Many members of the same family on the wall. Look at this heartbreaker below. Notice how the flower and leaf have a single common stem, designed for the leaf to present the flower as it does.

So I’ve got tons of pics to research later as I don’t have any idea what I’m looking at.

Other than a labour of love and a collection, this is also a research centre and commercial operation. If you care to Google Finca Dracula you’ll see there are orchids here which sell for $5000 each. So it’s deadly serious, as any operation at the state-of-the-art is. I decide to wander behind the scenes.

The growing beds are totally professional. I would guess there are about ten buildings of ship-ready orchids of maybe 2000 square feet each. Noticed the sign a bit late

This room was very securely locked up. I’d guess this is where big-money buyers come and that display in the middle is maybe where you’d find a $5000 orchid

Behind the scenes, a whimsical propagation lab 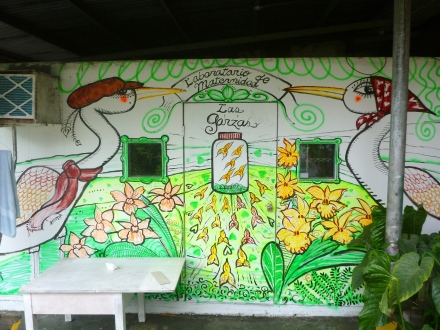 A painted wall near a potting area 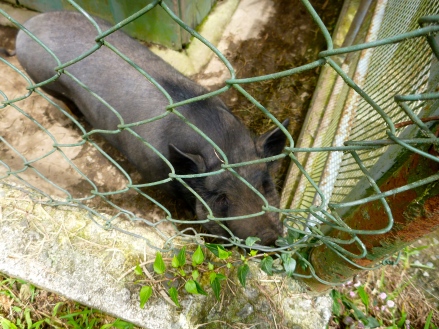 I wander around for an hour or so looking at the commercial aspects of the operation with respect.

I’m thinking that it’s been a great day and I’d better head back before the clouds explode, and it’s back to Volcan, which is a dive. This is the main intersection