The B&B owner was surprised to see me the night before. The roads had literally closed behind us. When I parked Lucinda for the night there were two bikes chained up. The owner told me they belonged to Equadorians who had just flown home, expecting a long conflict and no way home. They got lucky because the airport road was closed by the end of the day 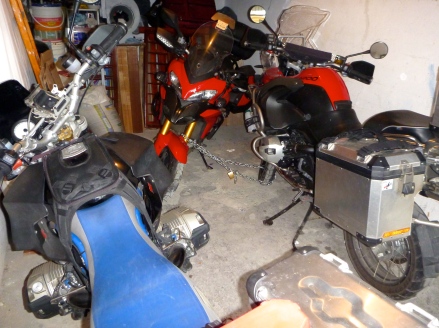 I was curious to see how far south I could get before hitting some sort of road block. I set off through the pretty streets of Pasto

Up through through a barrio

I noticed there were no cars as I started up the hill south and I rode straight into a pack of motos. We crawled up the hill towards another pack and then everyone froze. There was a burning building beside us and fire stripes across the road. And a crowd of angry guys, half a dozen leaders out front, with heavy sticks and rocks headed our way. These were the protestors and we were 1k from town. I couldn’t believe it. The war had come to Pasto. I fished out my Contour and took video of us in full retreat.

There was good brotherhood even with me, the gringo, as we stopped and started, not wanting to leave the scene but knowing the danger of getting with rock throwing distance. A tremendous experience, but nothing compared to what was to come. See the video to the left.

Ben, Maddie and I had agreed to email each other and get together. We met a cafe on the main square in the evening in time for a huge and later violent demonstration – the first in the south of Colombia. Ben has the photographs and I’ll update this post when I get them from him.

When we met our first shared reaction was ‘holy shit!‘

The next day we were going to be on the frontline.