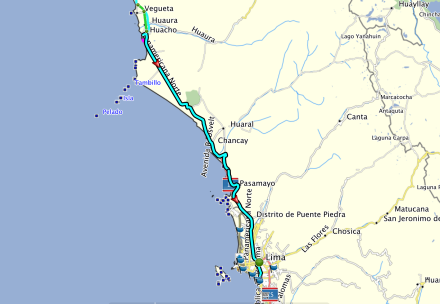 One of the great favors riders can do for each other is grab the other’s map and do what Hans did for me in a few key locations and write ‘shithole’ beside towns that are on an otherwise good track. Like he did here for Juliaca:

There’s nothing to apologize for because this is completely universal rider language. Places are either ‘really nice’ or shitholes. There would be thousands noted all over every map so it’s reserved for towns that look well positioned, a good size and safe, or might catch you unaware somehow. You gas up in them, eat lunch in them but you try to avoid staying in them.

Because Ben, Maddie and I were the first through after the Colombia problems there’s no-one else ahead that I know so I’m a bit short of the warnings. When I left Huaraz for Lima I thought I’d do it in a day but spent so much time goofing around in the valley to the coast I ended up looking for a place in Huacho, a shithole.

Anyway riding in it was obvious this may be a problem town. There’s one Hail Mary you can do (I’m glad to hear that others do this too) and that’s stop a cab and ask him to lead you to the best place in town and see what he comes up with. But like Chimbote the other day, Huancho is on the water so I head to the waterfront and look around. Thank God, no problem. No-one else there and virtually abandoned, it had secure parking for Lucinda and that’s almost all that matters.

Not making a big deal about last night, just thought I’d use it to illustrate the end-of-day situation once in a while and one way riders communicate. Another thing is I don’t complain about stuff so I’d like to spin this as informative rather than a negative.

So the best shot of Huacho from the beach this morning 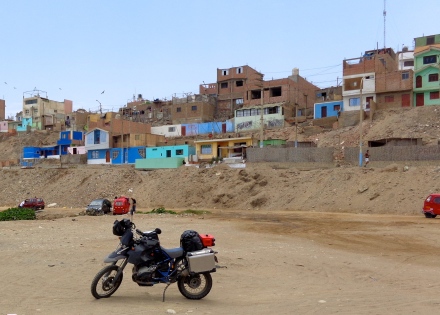 And the Hotel, pretty nice, very lucky. It doesn’t always end up so happily. 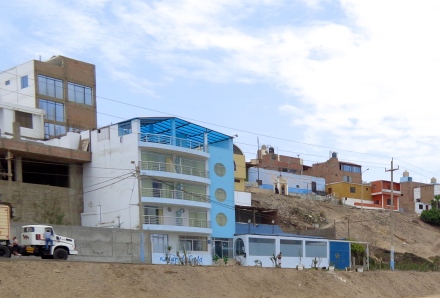 Anyway, got off track there.

The short ride, about 90 miles, was largely sand with large industrial operations

Some cool fortresses with the mini-observation towers

Over some sand hills as we approached Lima

Then it cleared and we rode alongside a famous barrio, a huge sand city, Pueblo Joven. 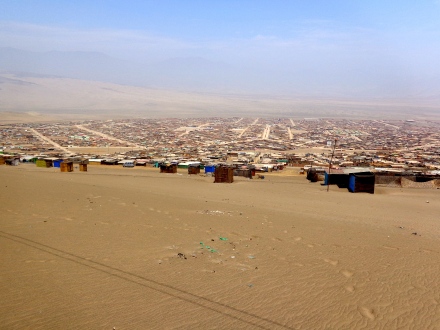 And into Lima, population 8.5 million 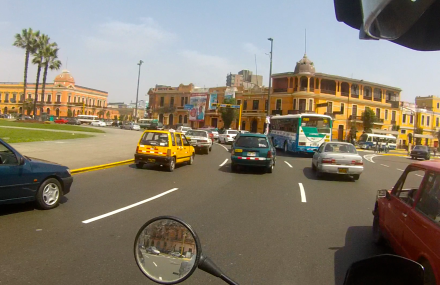 Down to the waterfront

Where they paraglide with the ridge lift in the evening