I thought I had my timed return to Lima set to coincide with my new pants arrival via FedEx from Klim. But as of last Thursday, nada. And Friday was a holiday. The on-line tracking which I’ve viewed several times a day until the weekend

Bits of admin to do as well. $US135 in perfect bills for the Bolivian border visa (creases or folded corners unacceptable, really), the Argentinian reciprocity fee paid on-line and bar-coded receipt printed and readied for reading at the border (reciprocity = we screw them, they screw us), hunting down the 4 countries insurance ordered via an agency in Argentina for the Bolivian border crossing for printing in Cuzco, all 25 pages of it.

Today we went to Museo Larco for the second time. The outer gates – gorgeous 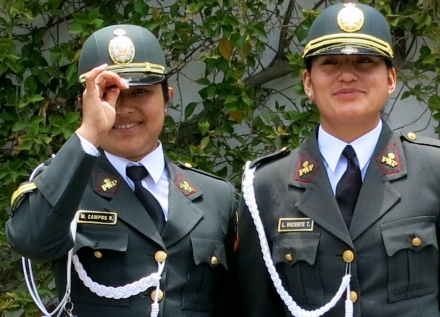 Then up a ramp to the inner museum

…The Larco Museum is a privately owned museum of pre-Columbian art, located in the Pueblo Libre District of Lima, Peru. The museum is housed in an 18th-century vice-royal building built over a 7th-century pre-Columbian pyramid (wiki)…

The Museum, a main road and a district in Lima are named after Raphael Larco, a collector of archaeological pieces. But he was much more than that, click the below link for his story

I’ve been to galleries in quite a few cities, including London, Paris and Washington and the Larco Ranks with the best of them. Although small, it’s been buying the best Peruvian examples. Larco, not one to compromise, even went to the black market for certain pieces 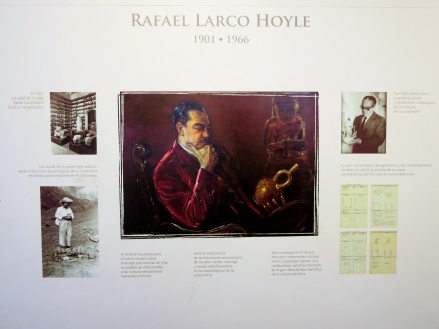 The photos sucked`all day. But anyway. There’s a small textile exhibit, maybe 30 pieces total. This one is Chincha, dating 1300 AD – 1500 AD. This piece, about 1 inch by 3, holds the world record for finest weave, at 396 threads per inch 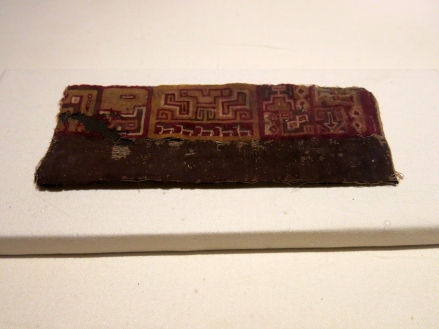 They had large pieces of sewn feathers

A section of a huge piece in blue and yellow feathers. A lot of birds, thousands. Imagine the importance of both the piece and the wearer

A few other historically important pieces

The ceramics halls were beautiful 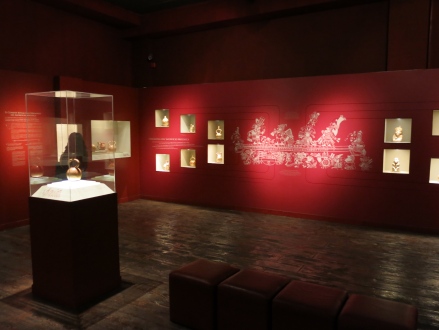 A bowl. There’s a central God here, Al Alpeac, who’s greeted into the world of the dead by every kind of nightmare

There are many pieces here to do with human sacrifice. This ceramic depicts throwing people off cliffs

There are halls dedicated to the incredibly complex Peruvian customs for preparing the dead for the after-life. A royal may be adorned like this. But with much more as well 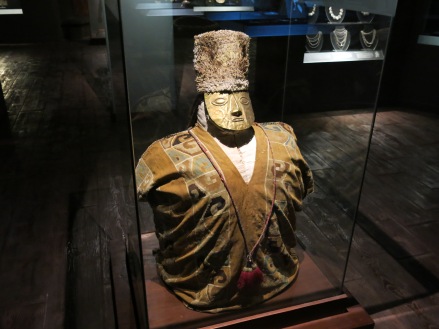 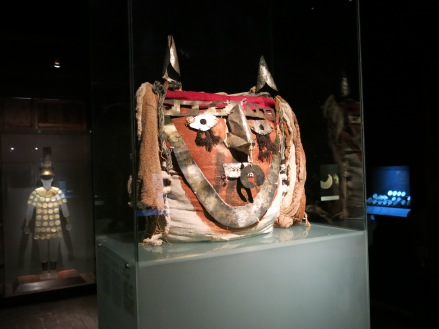 The gold and silver pieces were astounding. The Spanish conquistadors must have taken some pause before melting similar pieces down. Or maybe not, which is a lousy thought

The silver nose and ear adornments were beyond description. I struggled with the reflections in the room, but couldn’t get a decent shot

You just couldn’t see this coming. And once seen, never forgotten. Imagine these royals, wrapped in shawls of feathers, in some mountain temple, in the midst of human sacrifices. Intoxicating 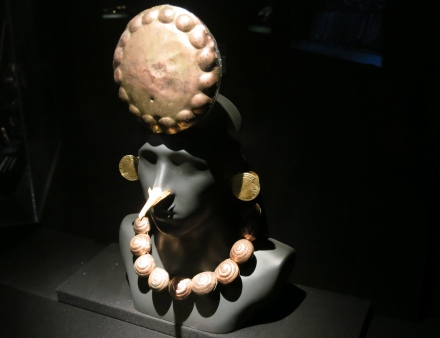 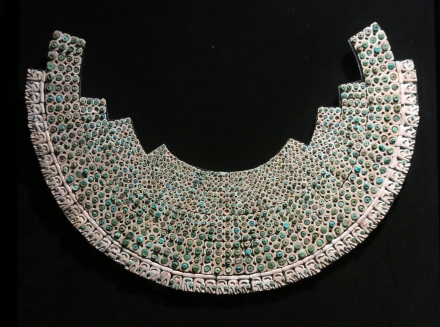 Over two days I took over 200 pictures and this post does the Larco no justice.

I went to the huge Museo Nacional de Arqueologia but it was nothing compared to the Larco. A stark contrast between the private and the public as usual

So, like we did in Categena, we went to the inquisition museum, Museo del Congreso y de la Inquisicion

The inquisition team is quite compact and organised

Either way, this is the penultimate step. Judgement. At this point you, the charged, are trying to read their facial expressions like crazy as they go through the preamble 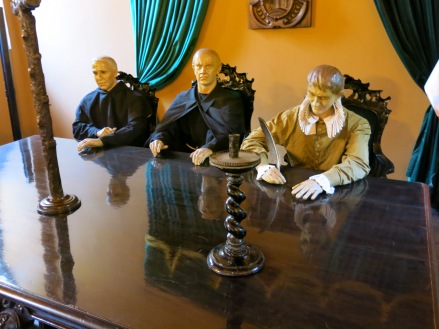 The museum was pretty helpful in showing the various torture stages of an inquisition, for instance making you wear red pants 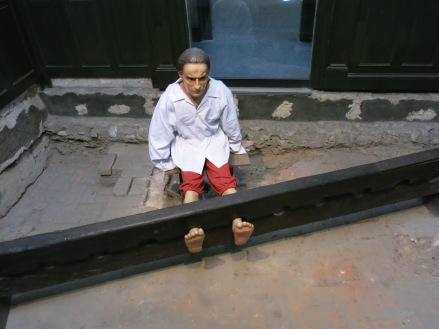 Then it gets serious 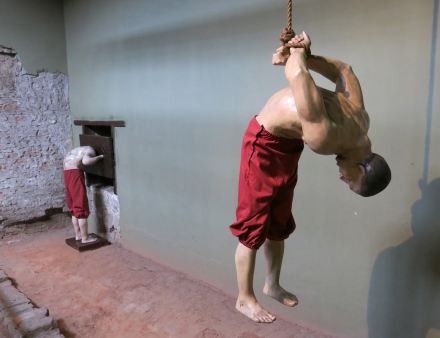 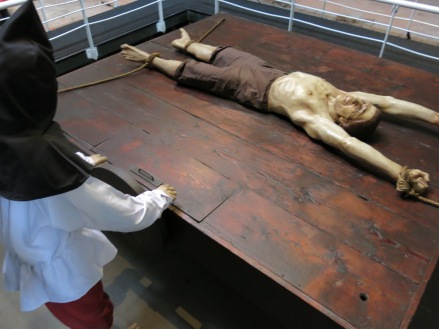 Or they have this chair that chokes you from behind. At this point I’m wondering what decency rule this exhibition is breaking. They went to great trouble to get the facial expressions right. The objective being to make us think ‘Christ, it must really suck to be him’. Unlike, say, riding around on a moto in Peru trying to decide whether to stop for a cold beer or just cruise a bit further along humming a tune

Across the street the main City offices 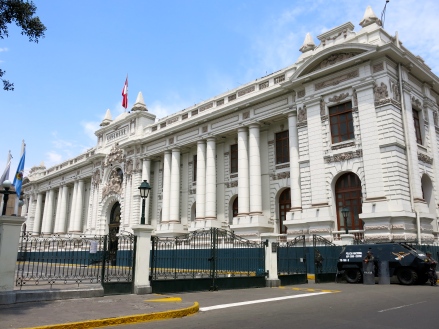 With heavy security at the gates. The military teams are variously named tigers, or eagles for example 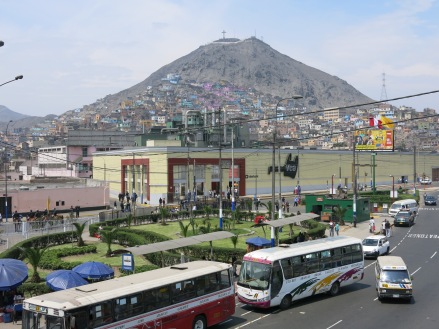