La Paz isn’t on any rider’s ‘nice’ list. I spent 12 days there, including Yungas Road. As you may know it has a population of 2.3M, is at an average of about 12,000 feet and is chaos. The feeling you get after a week is that, despite everything that would indicate the contrary, what’s going on is all pretty simple – more later. I was in this least desirable (or so I initially thought) of places to decompress because a good friend flew in to visit. 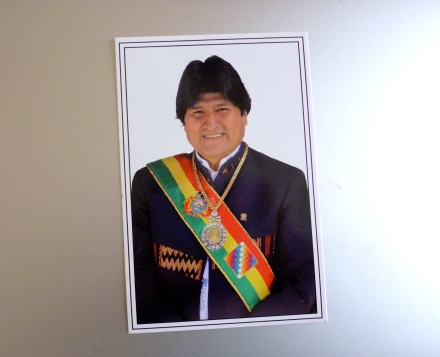 I’ve been reading about him. He’s Bolivia’s first indigenous president. He’s a fascinating and mostly effective leader and you get the feeling the Bolivians are lucky to have him, given the economic fundamentals. Although from a socialist background he’s pragmatic enough to weigh issues individually and the result is contradictory at times, but has that back-of-the-envelope common-sense style to it that’s rare, indicates strong support, and is quite appealing, despite strongly anti-Western moves and alignment with notorious baddies. The word on the street is that he’s mostly honest. Although his cabinet is said to be corrupt to the core, they know a good thing for Bolivia when they see it and let him have his sometimes very odd ways. He’s supposed to be a shoe-in at next year’s election. It’s easy to like many of the things you hear on the street about the guy, despite the normal blood-streaked Latin bio. For more, the Wiki is a good quick scan.

This is his office, the lower building on the left, off the main square. The boxes are Christmas decoration. Each box has a virtue, like moderation, patience or modesty labelled on it. I walked by them one at a time, looking for one for me, but no luck

A few ceremonial guards at the front door. Very different from the Latin America we know and love

This is deceptive. Bolivia is dangerous and La Paz very. This is El Alto, the poorest neighbourhood, with the best view 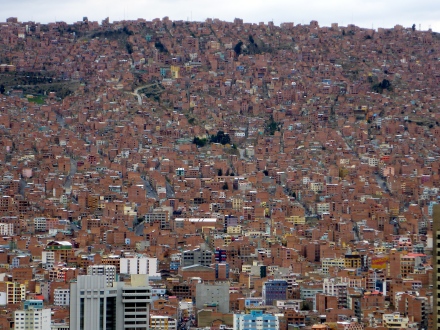 It melds into the valley rim beautifully

In the city, just as everyone knows, this is the daily reality 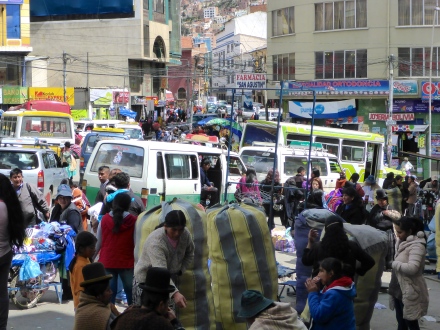 Which is why La Paz is famous. I took days of photographs of all this. La Paz is a now a monstrous village and market and on this level hasn’t changed for hundreds of years.

A flash flood through the city. Not uncommon at this time of year. The graffiti has deteriorated gradually since Colombia 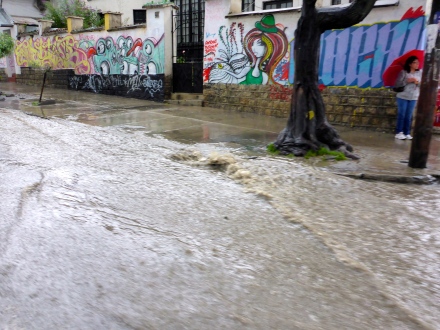 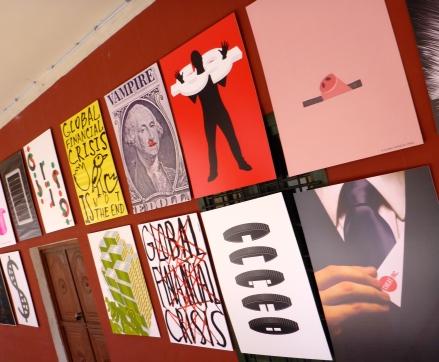 There’s futbol, the great equalizer, no better illustrated than only a table away here 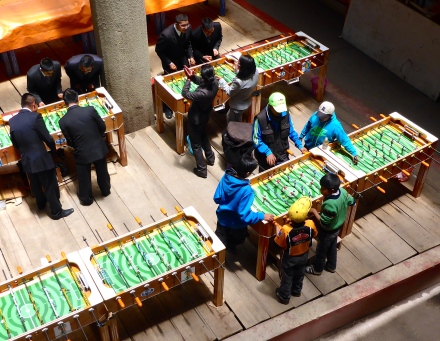 The Valle de Luna. If you’ve been to Alberta you can skip this

Llama fetuses and stuff at the Witches market, of course. Called witches because the Spanish labelled them that for selling mostly superstitious objects and herbs. You buy a llama fetus to bury in the ground before starting construction on a new home or building. This is standard practice still

One of the things I bought to ship back to Vancouver for Christmas got blocked by DHL in La Paz. I’d bought various concoctions, powders that you put in your shoes, or the shoes of someone else to create a materialoutcome. If you want to come into some money you put some of the correct concoction in your shoes, or if you want a girl to fall in love with you, you put another type in hers. There are some pretty interesting things you can get people to do. This apparently mostly works great and has done for hundreds of years. The packaging however by the looks of things could be designed in India 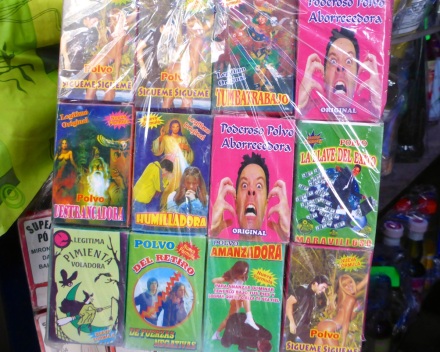 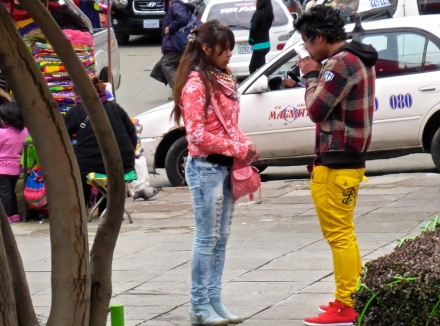 They’re not a lot of young hipsters in La Paz, it sometimes looks more like a million thugs, but this otherwise together-looking young guy was crying his eyes out after being dumped. He was all snotty and tears were dripping off his nose. You could hear his cries of anguish from across the square, and he kept it up for all the time we walked the area, about 30 minutes. My friend said not to worry, she was just testing him and he was doing fine. So I felt OK about taking a picture.

Copyright infringement is a joke in La Paz. Without any exaggeration they just don’t care and nearly everything has a borrowed logo. North Face, Mountain Hardware, Columbia, it’s all made here in sweatshops that I’m told are run by resident Koreans. Even perfect looking Oakleys for $10, which must be made offshore because of tooling costs, for a more global knock-off market. The thing that surprised me was the quality of the hangtags. I understand how easy it is to knock-off a fabric piece but it seems unnecessary to come up with high quality print. They had ARC hangtags that were faultless on stuff the company doesn’t even make, like cheesy sun hats. Or maybe they do, haha

Except around the food. The vegetables are beautiful. The Andes are where the potato comes from and you can buy countless varieties on the street. These beautiful potatoes are buried in snow then sun bleached and dehydrated 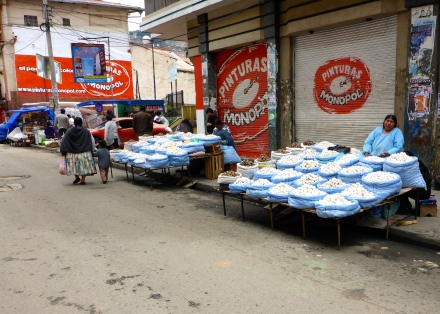 We’re long out of Central America, where Tilapia is the dominant fish choice, now it’s all about trucha, trout, which has about 90% of the fish market and is dirt cheap 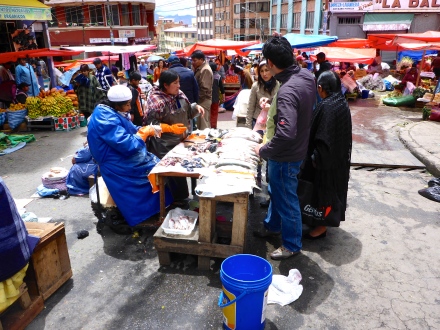 The vegetable and fruit markets had plenty of space

It seems every nook and cranny is taken up. This flower market was in a pit

Tradition aside, the most common street delicacy is jello and whipped cream which you see eaten everywhere

There are gondola towers being built-in an effort to get some of the (all privately owned) buses and vans off the streets. There’s apparently some tension about this and the countless owner/drivers won’t go down without a fight 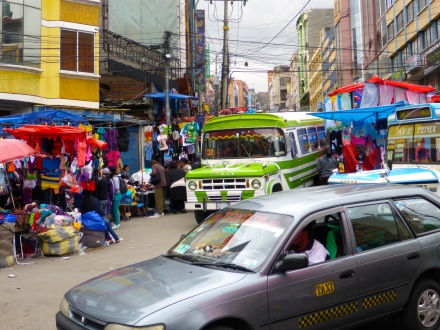 You can buy various derivatives but the leaves are the thing. Mis amigos de Cochabamba told me to take a large pinch and chew it slowly with a piece of chewing gum. This works great. But for altitude the best thing, or at least the best way to do serious quantity is to drink mate de coca, Coca tea. You can buy it everywhere in the markets and for altitude issues, like tiredness, it’s a must. And La Paz has the world’s only (so I hear) cocaine bar, called Ruta 36. The government tolerates it provided it moves every three weeks. Catching up with its current location is basic street knowledge and now part of a new La Paz tradition. And the highest quality cocaine in all of South America is made in the local prison, which is downtown. San Pedro prison is self-governed. You have to buy your own room, or if you’re a decent businessman, small condo. It’s of course a completely primitive system and ultraviolent. If you’re a good futbol player you’re made, as they have private teams and players are bought and sold. It’s life and death to survive as you can imagine.

There’s no zona rosa, a safe-zone, to hang out in which I guess is why it’s not on many people’s to-do list. Our hotel was smack in the middle of the jungle. According to the news, the violence attached to petty crime against tourists is going from bad to worse. I asked locals about this and they deny it however. But we got comfortable here fairly fast, there’s no very strong anti-gringo atmosphere, and there wasn’t in Peru either. Despite that, tourists are thin on the ground. Not a lot of cultural tours are possible around the city – La Paz isn’t like that. In fact, unlike any other large city we’ve been in Latin America, a museum tour could be, and was, done in minutes. And you read that most of the historic architecture has been torn down. It doesn’t seen to matter or be missed, there doesn’t seem to be the time or inclination for introspection. But remnants of the past are here and there. San Francisco church 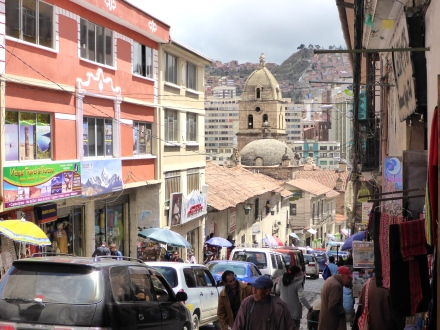 But for the full impact of a powerful village/city that initially feels like anarchy, there’s been nothing even close so far in Latin America and I would be very sorry to not come back one day. This post is too brief and superficial but we’re behind.