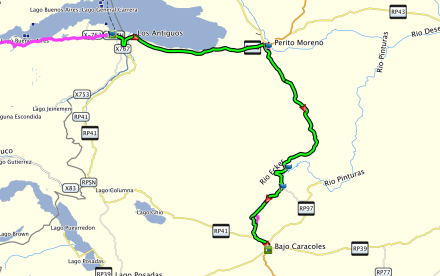 The Google Earths for the next few days are going to show nothing, which is the point. This side of the Andes is flatish and dryish.

Chile Chico is quite a big and clean town, maybe 5000 people. No idea why I didn’t get a better photo 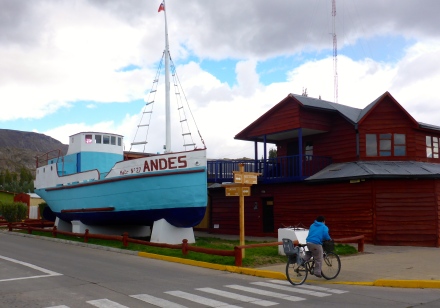 There are a few ways to cross into Argentina. I’ve picked this one because it leads to some of the most famous (to riders only though) towns in Argentina. Famous because they’re important stops on Ruta 40 for various reasons, each one having specific importance. And one is legendary, but we’ll get there and explain in a post two travel days from now.

But first we have a problem. It’s either nothing, or something. I’m running on a temporary passport. My last one expired and a new one is waiting for me at the embassy in Santiago. In the interim we have a white one with just a few page sides for stamps. Because of the Canada trip and the various crossings since January we’ve almost run out of room for more stamps. In fact if we don’t have merciful immigration staff at every crossing for the next month, we’re screwed and will end up stranded somewhere.

I’m pretty efficient (I think) with paperwork and so far so good at maybe 40 crossings or more. We had a minor catastrophe trying to re-enter Guatemala a year ago, but that wasn’t becase of error, it was because of a false assumption, which is kind of an error, but not quite I’ve told myself. And we sorted it out.

I need room for 8 more stamps before returning to Santiago in about a month. There’s room for 8 stamps, no more. One evening, back at the beginning of the Carretera, I shared this concern with Jerzy and we inspected my passport carefully together. He agreed it’s possible, but no room for error. So I need to explain my problem to each immigration official carefully and hope they are kind, squeeze the stamp in a small spot, and not nasty and sink me. Well, trying to find 8 kind immigration officials in a row is a huge long shot. Trying to find one in a row is tough. But generally I’ve been in an excellent mood and Jerzy agrees, go for it. The alternative is hightailing it back to Santiago, a two-week detour, or find somewhere safe for Lucinda and fly back for the new passport.

So I wrote out a speech asking for stamps to be placed in the smallest available space, wording it in a careful way, begging for mercy without sounding weak. In Latin America if you look weak, they eat you. I used Google Translate since this task is way beyond my crap Spanish. Then I sent it off via email to Claudia in Guate for a second opinion. Having a two paragraph speech now dialed, we ride to the Chilean exit border 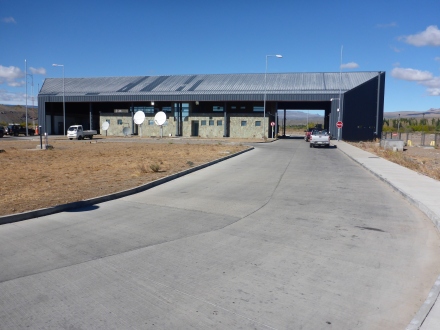 It’s very modern, and only a car or two here. No surprise as there’s nothing on the other side except a vast wasteland the whole way to the Atlantic Ocean.

Walking in, the building is empty. Just two signs and two people sitting at desks under them. On the left, immigration. A 40-ish pretty-ish lady. I walk up to her, paperwork in hand, and deliver my speech. She stares at me, holding my gaze, not saying anything, thinking of a reason to mess me up. It was probably only 10 or 20 seconds but it felt like hours and I broke – I made the mistake of looking at her with an over-friendly smirk. An automatic reaction to Latinas in uniform. Bad idea. She reaches for her stamp, looks down at my passport, flicks the pages until she finds what she’s looking for and BOOM! hammers a stamp in the middle of the biggest blank spot. Now I’m screwed.

She hands my passport back without a look and I move 8 feet to the right, to the customs guy, shocked.

He’s a nice guy and looks at me with sympathy. To be extra-nice he processed my TVIP in about 5 minutes and sends me on my way.

Oh well I think, we’ll reassess after the Argentinian building. Having less money than Chile, the office is modest

It’s the same inside, two desks, two signs. I walk up to the girl on the left. 30-ish, pretty. This time I give my speech without giving her my passport, in an effort to stay in control somehow, although exactly how I can’t imagine in retrospect. She hears me out, puts out her hand for the passport. I open it, find a small economic spot and hand it to her, pointing out the spot, looking weak. She carefully puts it down and stamps it exactly where I asked. Mercy. The guy on the right is smiling and processes a new TVIP for me in five minutes, just like 30 minutes ago. The shortest border crossing ever.

Once through, I ride down the road a few hundred feet and stop to look at my passport. Nope, trouble. But it might still be possible if 2 officers ahead don’t mind a fair bit of overlap or 4 some overlap. This is insanely optimistic but we’re going to play it out and see what happens. It’s all coming up soon, so you can take bets now. There’s another wrinkle. If it all goes wrong it mustn’t go wrong on the Argentinian side or there’ll be a huge epic, rather than a big epic. 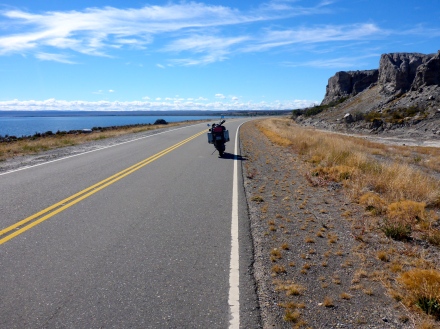 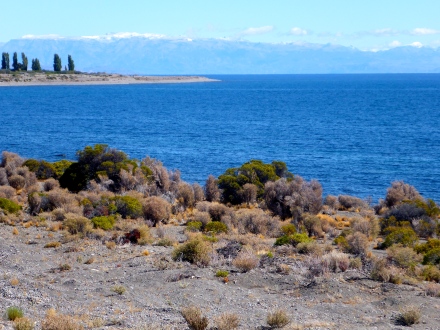 Zoom, off into the distance

Stopping, I walk back slowly and for some reason I’m able to get very close before he darts into a crack in the rock

Then press on through coloured hills

Very nice. And absolutely no-one around 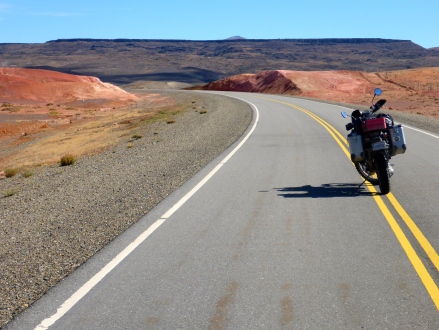 A Lucinda shot from her best, coy, angle

Once again the photo isn’t as dramatic as the reality

Into Bajo Caracoles, in the middle of nowhere

So years of riders have stuck their ride-promotion stickers on the pumps. I crash in the hostel, slightly nervous of what’s two days ahead. Two things to worry about now. But for some reason nothing seems to dent my spirits too much, life feels good 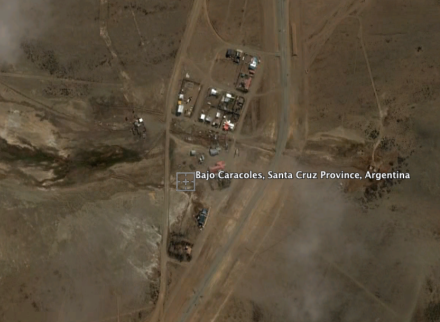