This was a touristy day that ended in a mini-adventure.

The Fremantle Prison has 4 different tours and we did 3 of them. The 4th, a torchlight tour, seemed more sizzle that steak so we passed on that. But even doing three was nearly a full day exercise. Our first tour started at 11:30 am and the last finished at 5:45 pm.

The numbers of convicts sent here to Australia enormous. Between 1788 and 1868, 186,000 were sent here (wiki). The story is well-known, so no details needed. However Lucinda and I were under the impression that jokes about blood lines were overblown until we read this number. The prison closed in 1991 after a huge riot a few years earlier.

Anyway, it was an excellent tour.

A block away from the Prison is the Fremantle Oval, where they play Australian rules football. Check out the lower figure in the sculpture

We go through here

The prisoners built the structures from the limestone hilltop. The white line on the wall at the back shows the original contour. A massive project

Inside. That’s the chapel in the middle. Cells on either side and in other buildings 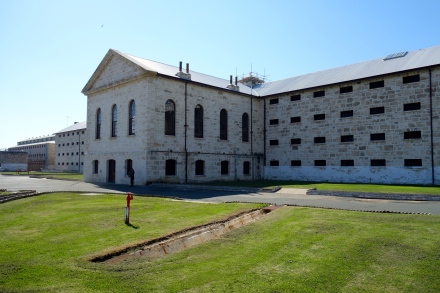 Inside the building. Other than the third level its remarkably similar to the jail in Ushuaia, but is enormous 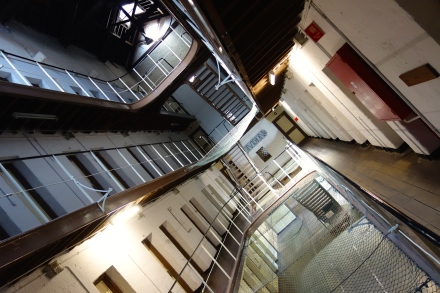 The tour-guide, Sarah, was very crude and very funny. She had tons of jokes about the bucket toilets. Mostly she liked scaring the kids on the tour 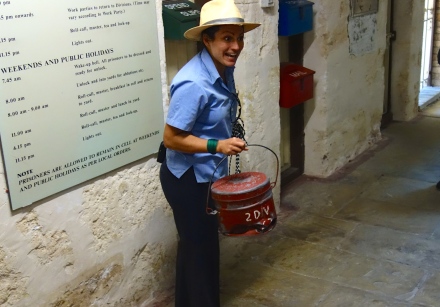 She liked scaring everyone else too when she had a chance, no holds barred. Look at the expressions on the women’s faces here. No way would she get away with this at home in Van. I learned something maybe about Australia from this. Excellent

There are many inmate stories, here’s one: The art on this cell wall was hidden under porridge by the artist, James Walsh, a forger who went on to be one of Australia’s most important artists. Another long impressive story, very important in Australian folklore, is a story about Moon Dyne Joe, which is worth a Google 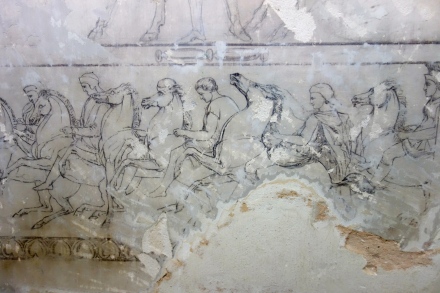 Here’s the worst block. Solitary confinement and the cell where the next inmate to be executed was housed. The building. 24 cells

Inside one of the cells

The pit below the noose where 44 inmates were hung, including one woman. There were some particularly gruesome stories about some of the executions including 2 decapitations and something even worse you can Google for if you wish. This was disturbing

This group of frightened schoolkids are on the innovative and highly successful Australian SKS (Scare Kids Straight) program. They’re being locked in a windowless cell alone with a piece of bread, a glass of water and a bucket for the day and given a stern talking to hourly

The second tour was called Great Escapes. 288 convicts escaped, all but 7 recaptured. The 7 were all part of the same sophisticated and brilliant plot orchestrated by a famous Irishman. A great story

The tour guide, John was a character. Here I’m the escaping convict and he’s shooting me. On Van terms he also stepped over the line with his stories. But not here in Oz. Good.

Since he seemed to be open to any question I asked him why the 288, who knew they were bound to be recaptured didn’t break in here, the women’s block, where they were certain of being rewarded. He didn’t know but liked the question. I asked him a follow-up, with Lucinda out of earshot

So if you like to be entertained with stories, this is an outstanding pair of tours by skilled and frank guides.

Now the best part. A long and excellent 2 hours. Here’s our guide Steve. There are only three of us. We had to fill out the standard waivers and stuff.

Briefly, the Prison (and the town for that matter) needed water and had to drill for it. Because of the nature of the water table they had to bore long horizontal tunnels off the two main shafts at about 60 feet depth. They were dug by inmates.

I was kindof surprised they breathalized us. Jokes here about the number of failures they see and by whom. I was doing quick math about ounces-of-alcohol burn-off-in-how-many-hours-has-it-been as I had been out with cousin Tony, who I have not seen for 40 years, or very roughly since I was 2, the night before. In fact the three nights before.

We blow a graphic bar from left to right for about 15 seconds. I pass with an unusually perfect score. I had Steve take this photo for me to show to Lucinda

We check out the tunnel map

The into this room to suit up. We’re given a locker each. Strictly no phones, cameras, jewellery, etc.

This was the other guy on the tour suited up and looking like an idiot in wellies and a paper suit-with-hoody. Which I refused to pull up. 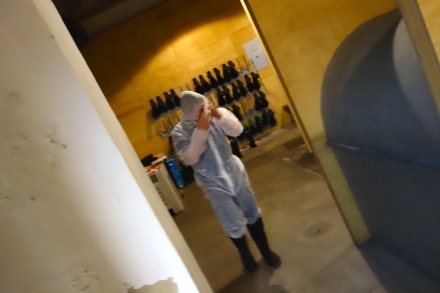 Then we went over here and put on a safety harness and fall arrester. Photo time with our cameras by Steve. I’ve been protesting Rider-Reports-as-Egoistic-Reality-TV (which isn’t making me popular, but it’s something to do for lack of any other conflict going on) so try and block the shot 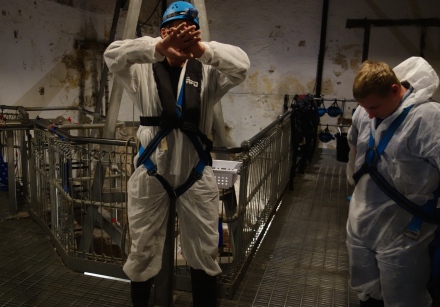 Looking down the shaft. There’s clear water at the bottom. The shaft is dimly lit. This is the last light not given off by our headlights. Awesome

Down we climb, clipped in.

The tunnels are only tall enough to stand up in once or twice, and then only for a very short, maybe 10 foot section. The average tunnel height is about 4 or 5 feet we head off down one tunnel in the darkness through mud. Here’s a photo stolen from the web. You can touch both the walls. Sometimes it’s much narrower than that, and much lower. 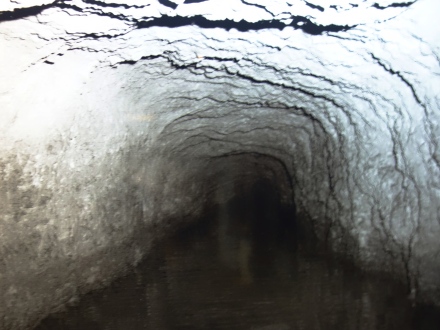 We take a few corners. We’re headed for the start of where the tunnel’s flooded. There are small boats waiting for us, copies of the wooden ones the convicts used

In we pop, a boat each, and start down the tunnels slowly. We can either paddle or pull ourselves along with our hands on the walls. This is tremendously cool: It’s very very dark, even with our headlights which can’t penetrate ahead the whole distance, and when they do they show a dead-end, which is actually a corner. We were in the tunnels for over an hour.

Then the highlight: Steve, just like the guide in Jewel Cave asked if we should kill the light. So we switch off our headlights and pull our little boats down the tunnels in the pitch dark, with the only senses you have are the breathing of the others and the cold feel of the walls. For a long time. Fantastic. We were given a nice certificate after.