The day’s track. A short ride but we have another job to do 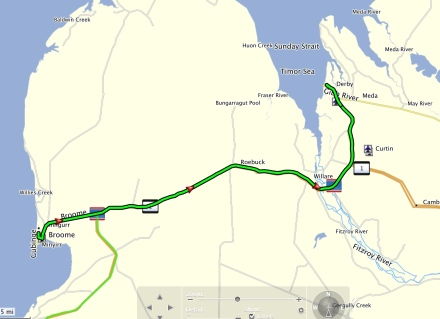 The new tire, or at least new back in Broome

The low shrubs/trees landscape out of Broome was burned for miles, leaving the termite mounds more clearly visible 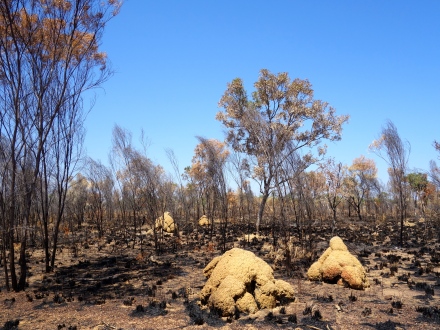 Then, after a while, the mounds changed. Smaller, and much more frequent. We’re guessing a different species 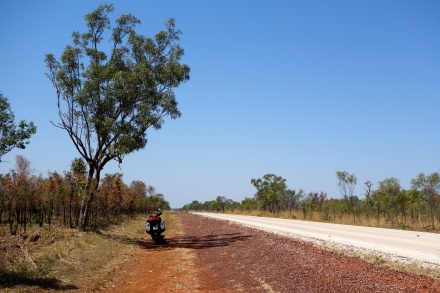 A Boab tree, native to Australia, with a relative in Africa

And this beautiful giant

Then, almost due S of Derby we started crossing large ponds and small rivers. The Google Earth of the exact bridge area in the photos below

The first of the bodies of water. Cut off from the Fitzroy river during the dry season

We looked over the edge and saw this

Which if you look closely has a fish in it. Here’s a crop of the above shot

It’s an Archer fish (wiki), which we all know about from Junior School.

Then there was this

A crocodile. A small one, maybe 6 feet.

Crocodiles are the big thing in the Kimberley, and the whole way around the top of Australia. This is a fresh water crocodile. They are all man-eaters. The saltwater crocodiles grow to 15 feet/5 meters. The Aussies call them ‘salties’.

Here’s the shocker: You must not swim in the sea anywhere in all the thousands of miles of coastline from here east. Period. A fisherman was taken just two weeks ago in front of his wife. The rivers are the same. The saltwater crocodiles can live many miles upstream from the sea. And in water holes they call Billabongs.

From the left, the 1st sign talks about the fresh water sawfish here. Endangered. This is one of the world’s last strongholds for this fish. The 2nd sign talks about the fishing rules. The 3rd talks about botanical quarantine, a very big deal in Australia. The 4th is the big crocodile warning. They will attack. If you camp next to the water they will drag you and your tent into the river.If you fish to close to the edge they will charge you. Etc. The 5th, a flora chat. All very interesting as you can imagine. So no going in any water for the next couple of months.

The huge piece of water on the Google crop, from the bridge

At the one-and-only roadhouse we meet a fellow on a Ural. He knew South America well. Amazingly he and his wife had taken the fancier second ship to the Amadeo, the Eden, that Lucinda, Claudia and I took, up the Chilean archipelago from Puerto Natales to Puerto Montt. He called it the trip of a lifetime 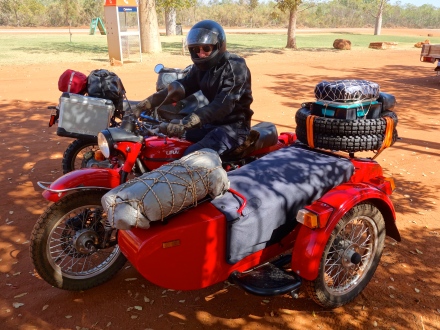 There are only 6 towns up here in an area of land the same size as California. Derby is tiny, remote and largely aboriginal

The waterfront. Hot and tropical. And the biggest tidal range in the southern hemisphere. Crocodiles cruise the shoreline

A few people fishing from crab off the long dock. I laugh there’s no guard rail, given falling in means being eaten, they assure me. I ask them if they’ve been in for a cool-off, since it’s a billion degrees out. Never, they say 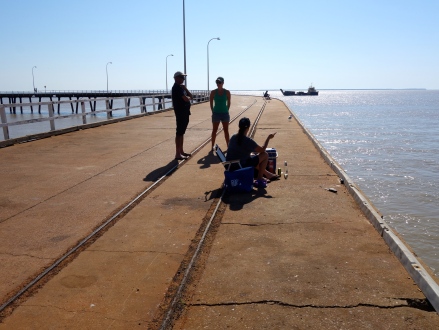