Did a few Thai things while we waited for our new starter motor. Andrew brilliantly arranged this through his local dealer in Singapore, which saved me having to ship one from Vancouver or Melbourne. There wasn’t one in Bangkok, which wasn’t entirely unsurprising.

So. We go off for a ‘must see’ and take a tuk-tuk downtown for a 9:00 pm fight start. Tuk-tuks are almost infinite in variety and performance, varying from wrecks that die for good at a light, and you get out with a laugh and wave down a new one, to (occasionally) tricked-out dragsters, like this one. A good start, we don’t want to be late

Muay Thai is Thai boxing. There are two places in town to see this and we’re at the ring the locals and repeaters go to, not the ‘show’ type fight.

There are 5 rounds, 3 minutes each.

After they enter the ring they appear to do 2 things. First, with Thai music in the background, they do a combination of a prayer and a dance. Then they visit each corner with a further prayer

The first round is very tentative. It’s very beautiful: they’re solid on the back foot and mostly tapping in time with the music with their forward foot, ready to strike. They hold eye contact, looking both serene and wound-tight, like a rattler. It’s more of a musical dance, at first, than I anticipated, very different from Western fighting 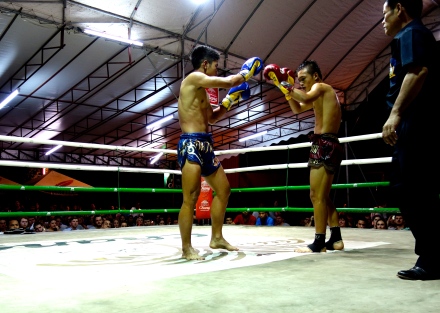 Super-fast kicks start the action. Most are fended off with the arms, some land, only a few miss

After a few fights it’s clear the fight starts, and hopefully for one fighter is finished, in the 4th round. The 2 minute break at this point is particularly intense. Everyone is quiet

And it turns into a brawl. There’s no breaks in the fighting, they attack each other relentlessly. It’s this way in every fight, total war starting when they come out for the 4th. The guy in red shorts comes in with a left foot 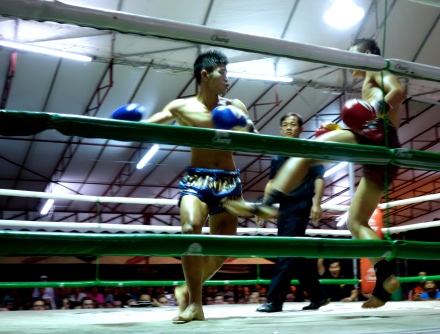 It’s brutal and three of four of these in rapid succession usually ends in this. Down, medics in, the fight’s way over 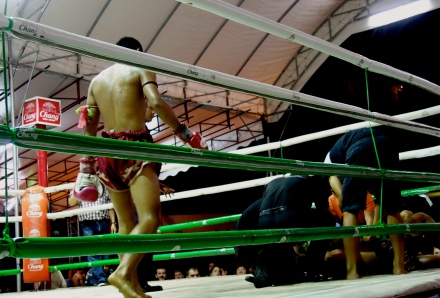