A painting of Narasimha digging into Hiranyakashipu 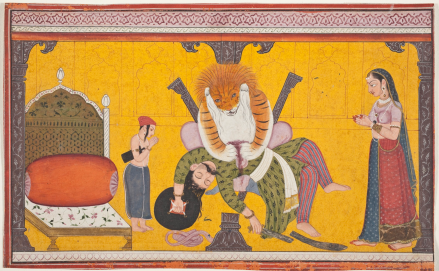 A radically shortened version of this, so please refer to the original if you have time:

It was a time of intense misery for the whole universe, all due to just one powerful demonic person, Hiranyakashipu (who) desired to overthrow Lord Brahma, the Supreme person in the universe.

Hiranyakashipu bore a deeply inimical attitude towards Lord Vishnu whom he despised for having killed his brother Hiranyaksha.

Lord Vishnu said that Hiranyakashipu had brought death upon himself by tormenting cows, brahmanas and saintly persons.

Lord Vishnu thunderously appeared as Lord Narasimha, half man, half lion from within a pillar of the palace.

After a brief duel with the demon, at dusk, which was neither day nor night, Lord Narasimha who was neither man nor beast, sat at the threshold of the palace doorway, which was neither inside nor outside, placed Hiranyakashipu on His lap and tore apart the stomach of the demon with His bare nails not using any weapons.

The appearance pastime of Lord Narasmiha is lesson to non-devotees not to make plans like those of Hiranyakashipu to trick the Supreme Lord for the sake of worldly enjoyment. Modern society, which is busy making plans for sense gratification akin to those of the demon, neglecting to develop devotion to God.

The appearance pastime of Lord Narasimha is a direction to devotees to be firmly fixed in their devotion in all circumstances.

Constantly remembering the Lord, a devotee can sail over any perilous situation of this world without any harm. It is a strong message to the people of the world to accept the Lord’s infallible protection by becoming His surrendered devotees.

Here’s the Narasimha Swamy temple, also known as Simhachalam, outside of Vizag. It dates back to the 9th century. Here’s the wiki 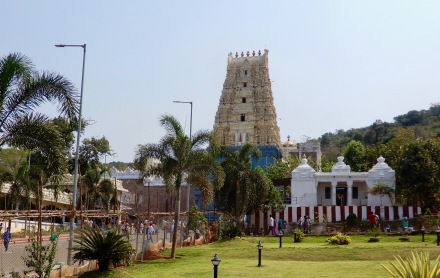 Set into a wall, inside, weaponless disemboweling 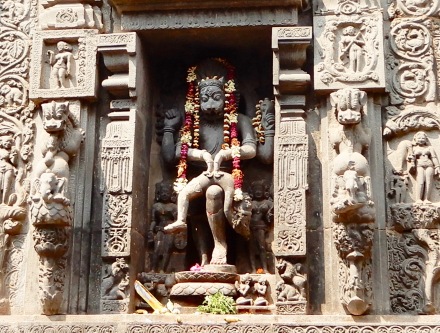 The more I see this way, the less I want to talk about it, for now. The complexities are overwhelming. Maybe I’ll get brave enough for observations, but that would involve a co-conspirator who knew more than I ever will about this. I’m working on it.

Me doing this, below. Huge haircut 3 hours earlier. I’ve finished the route planning for the next series of rides. They’re really short as the country continues to heat up and get serious for the summer. It’s already serious, but it gets worse. Then it monsoons for 3 months. So the idea is to be off the road each day by 2:00.

The meta picture of the ride is in flux. I’m pulled in 2 different directions. The one I though was winning just a week ago is now loosing