A long excellent day. First of all, the day track below for reference. This is almost half the length of the country. Small, the nearly 7M people make it the mostly densely populated Central American country. 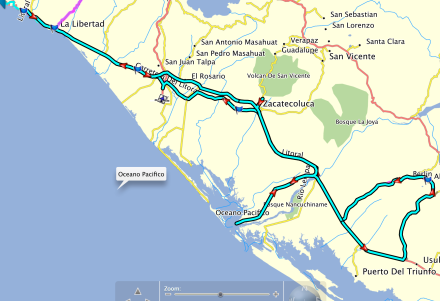 So I had to head back to El Tunco this morning early. Something I’d forgotten. There are two ways south down to the plains from the volcano. The way through Santa Maria (the way I came up yesterday) or through Berlin. So off I went for the steep ride down and lo and behold it’s perfect dirt the whole way. But from the top, the morning view down through the volcanoes

Looking the other way

Then down quickly into the jungle! Yay! Monkeys (no)! 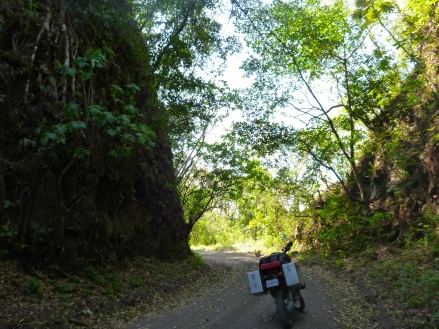 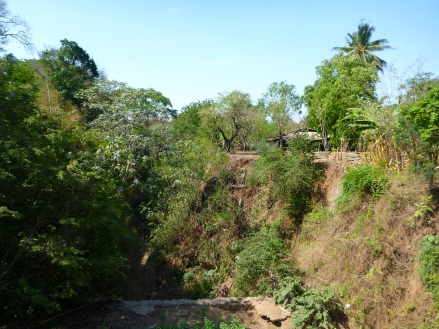 To the bottom, 20 miles later, and another pretty river. There’s a fisherman almost in the centre of the pic, just a bit to the laft

So I walked down to watch him, and caught his net just before it hit the water. He only casted twice in ten minutes. Patience

Then, on the flats, navigating cows. For the moment i’d blanked and forgotten how to say *get out of the way you fucking cows!* in Spanish, but they don’t spook easily anyway so we steered through them

And the ride down was over. So the loop up to Alegria and down, with the connecting main road, is now my favourite all time loop. Why do I think I’ll be back to do it again? Here it is, for your trip down here

Then off fast to El Tunco for a couple of hours to get my chore done. Then back again, but we took a diversion about 30 miles down a dirt road, following the Rio Lempa to the ocean, which was just out of sight at the start. It was a dead end so we saw virtually no one. This can be a bad thing, and we had a random incident with a local in a pickup who didn’t think we should be here.

Incredibly lush land down the road

Until we got to the end of the road. No ocean access without a hike and I’m not leaving Lucinda alone

But we were beside the Rio

Then, tired, we raced up the side of the volcano, pavement side, back to Alegria.

What a difference a border can make. El Salvador is a completely different animal. More on this in a few days.

I’ve read a few ride reports from others and I can’t remember anyone whining as much as I have about the heat. And I can’t use being Canadian as an excuse because some of the others have been too. Oh well.

So the plan was to head up to altitude to escape it for a few hours.

Next to El Tunco is a town of 35K, La Libertad, which seemed like a good place to explore.

So I rode around the backstreets on my way to the Lake this morning. Here’s the town behind the waterfront

Up to the mountains. The road around the lake was superb 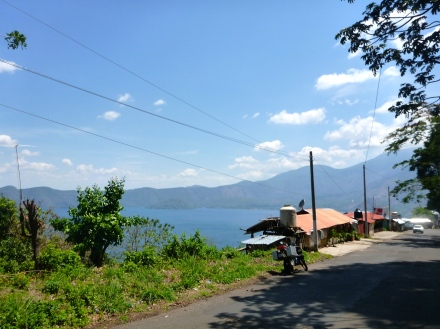 A few miles of  pavement down from the crest, then dirt for a few miles around the lake. It’s a continuous community

We arrived at a tiny restaurant over the water.

The water, according to all reports is supposed to be cool. It isn’t, it’s like a bath. Back to the temperature thing. My usual greeting to people isn’t *Buenos Dias*, it’s * Mucho color. Es normal?* which translates roughly to *Christ it’s hot. Is this normal or what?*. The Latinos are pretty intuitive and reply, kindly, * no it’s not normal* which means *as your host in this country, since you’re obviously suffering, I’m going to be tactful and pretend this is abnormal*

After lunch, up to the caldera rim and back onto this beautiful road

With great views of the lake below. Lucinda insists on hogging the photos, showing off her new Rotopax, which she thinks is very ADV’ish 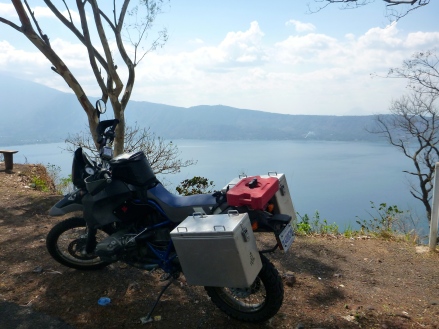 On the other side of the road, the landscape is gorgeous, and mostly farmland. El Salvador is tiny, only 8K square miles, with 6M people. But it doesn’t appear that densely populated so far

Then back to the coast. A cop pulls me over, mostly just curious again. Things are slower here for the most part and he reads the registration word for word. Patience… 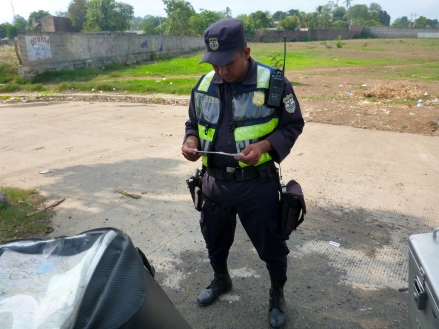 The track. Yup another wrong turn in there

Track: to El Tunco, El Salvador. Note the overshoot midpoint. The same as on the Las Guacamayas track. It must be the heat. 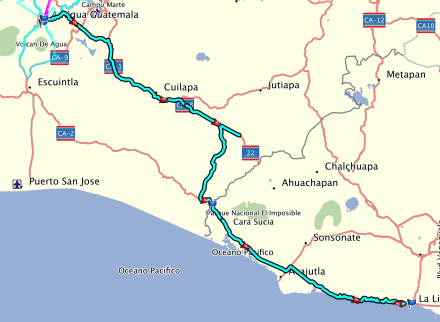 It is so hot right now, here on the ocean. The same punishing full-humid 105F+ we tried to endure in Las Guacamayas, MX. The thunder of the surf, not welcome for the first time ever, feels like a hammer and I wish it would back off. The mosquitos are brutal. There’s nowhere to hide. It hasn’t been the best day because of that, but we’re headed south and we rode alone, and that’s all good.

We headed for the El Salvador border early, headed for the ocean, which always calls. A few weeks ago ago we were on the Caribbean , now it’s the Pacific. We chose the low border crossing because we didn’t want to go through Guatemala City. Enough of that in the last week, and the northerly start to hold off the heat as long as possible.

But first, Lucinda. Taz built a bracket for a single Rotopax yesterday. I’ve always been concerned about our range and this is a first step. I’ll add a second stack when I can find one. This one was used and hanging around his shop. To appease the Gods of ‘light’ I jettisoned more gear late last night. I ditched the armour. The duffle is down to a token gesture. I have tools, spares, insulation, tech, and a few clothes. Washing will be every night now as there aren’t any duplicates. I wouldn’t think about that factoid if I was you. It really can’t get any lighter than this… 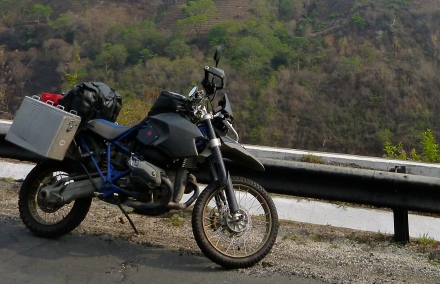 Lots of small towns to navigate first thing. This is typical and always interesting riding
video

After the towns we descend

And into the country. The heat haze is building 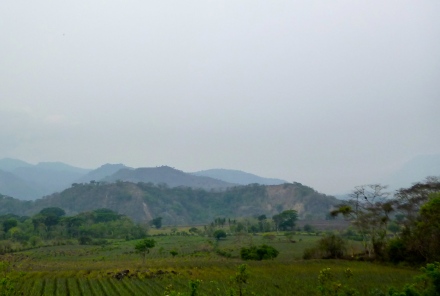 Then to the typical border town. The heat is building like crazy. It’s through 100F

And the border. Sure enough, our new Guate plates mean no aduana, but their’s a new vehicle permit thing going on and it costs us an hour 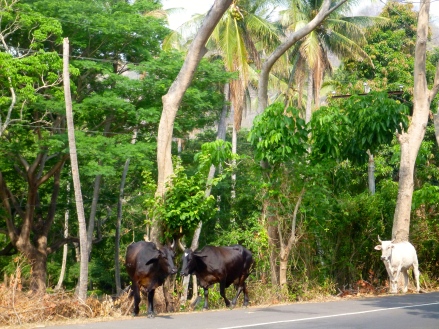 This guy wouldn’t move. He was eying up the brunettes above, trying to decide. I considered his problem. Not easy, they were pretty close.

Through miles of canopies

Open glades. A guy on a bike said these were sugar cane fields.

And miles of fields that were burned-off but had stands of palm. A mystery but pretty

Then the road veered off towards the ocean. I was looking forward to this. The riding was excellent and twistied along the coast through five tunnels. We love tunnels and bridges. Immature, we know

Then the twisties got closer and opened up to the ocean. Magnificent. An ocean with a tunnel

Then 30 miles of this. I’d lost time at a border again, and stopped for photos a fair bit and had to press on to find somewhere  to crash, and we I was tired. The heat.

We rode into El Tunco, after the first two prospects said no WiFi. No WiFi ahead is like potentially missing a tax instalment. Worrying 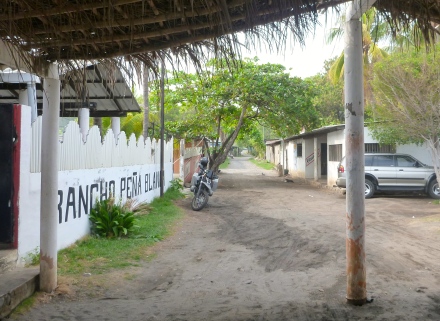 The view of this surf haven. Black sand. And super hot

There was work to do this morning. emails, banking, laundry, all the stuff that hasn’t been done in the last week. Then I couldn’t stand it anymore and went for a ride.

There’s a loop around Volcan de Agua (the huge Volcano that dominates the valley) that’s dirt between the pueblos of Santa Maria de Jesus and Palin. About 1/3 of the rest is a main road.

If you’re in the area here’s the track

A few miles out you ride through Santa Maria de Jesus. A town made entirely out of unpainted cinder blocks.  This is a classic example of why you don’t ride at night in Central America. A dangerous town

Then immediately into country around the base of the volcano. Lucinda is running around without her panniers for the next few days. She thinks it looks OK but doesn’t like the feel of her rear wheel in steep descents, she says, adjusted as she is to having more weight back there. Not for the first time we think we need a quick-reference setting for the rear Ohlins preload.

Then, a little further is the pueblos’ garbage dump, which is for hundreds of yards the side of the road

Huge vultures resting in the trees

Back into the woods

But they’re always there 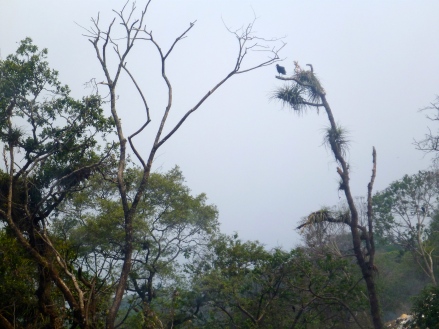 Into Palin then back

Happy that I’d discovered Campeche the next question was what next in the little picture. This was pretty easy. No way was I going northeast to Cancun. So that left two ways to get back into Guatemala. Either back to La Florida or through Belize. Maps trump Basecamp for overviews, so last night I pulled one out and lo and behold there’s a huge blank section in central Yucatan. Maybe the most remote area in eastern Mexico. And a little road goes through it con nada por 100 miles, from the town of Dzibalchin to Xpujil. It goes through the Meseta de Zoh Laguna.

So Belize maybe tomorrow, assuming this 250 mile route doesn’t turn out to be dirt. Then we’re bivvying.

An hour later the GPS blanks out again and loses my route. It first did this in Georgia. My problems are hardware related I think (I’ve cleared everything through a new profile) and the best Garmin can do for me is to ask me to send it back for repair. Oh sure, in the middle of an RTW. It’ll wait, now that I’m understanding its idiosyncrasies (it’s nice to be able to do this) and I pull over and unpack my duffle, pull out the PC and transfer the route again. No problem. I can do this all day you little bastard. But best not to flash expensive stuff like this around so I do it in as public a place as possible, counterintuitively, and do it fast, and bolt.

Then off through the backstreets of Campeche

Into the country. Temperature? Hot, but getting used to it.

We left early so we’re hungry, before we get to our little road, and stop in a village for brunch (don’t ask)

The final town before our road is old and interesting. Judging from the looks I get no one comes this way

Then our road. It’s fantastic. Barely 1 1/2 cars wide it’s pavement, with about 10 miles of dirt at the end, and winds perfectly between encroaching vegetation endlessly. The should be a must-do for riders going through the Yucatan

Then the one other town, paved with red brick, which deceptively gives it a prosperous feel

For about 30 miles we ride through swarms of butterflies. Rather like Texas hill country. Here’s a male.

Then when our road ends it’s a horrible 50 miles of freeway to Chetumal, for a border crossing in the morning. It’ll be ugly.

Track:  Palenque to the Caribbean

I’m somehow not able to upload images unless someone else logs me in. I’m working on it with with SS. Stories to tell when we figure it out and I catch up on this blog.

Anyway, in the interim, I’m in Palenque, MX. The temperature in Las Guacamayas two days ago was 43C, 109F with 100% humidity. My GPS became too hot to touch and crashed. Today it’s 37C, 98F. It’s apparently hotter ahead again.

Here’s my track for the last six days. The first three, in Guatemala, were with Julio. 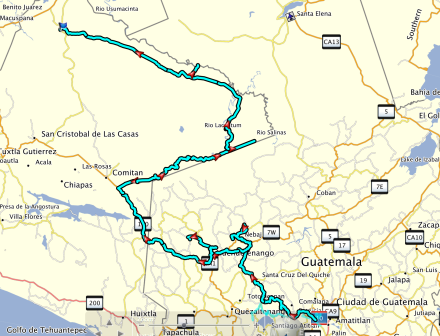 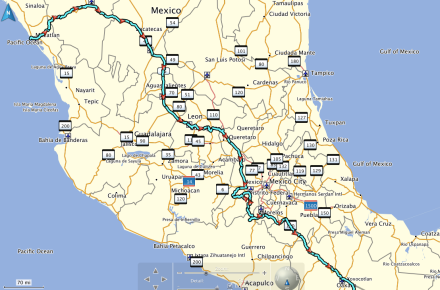